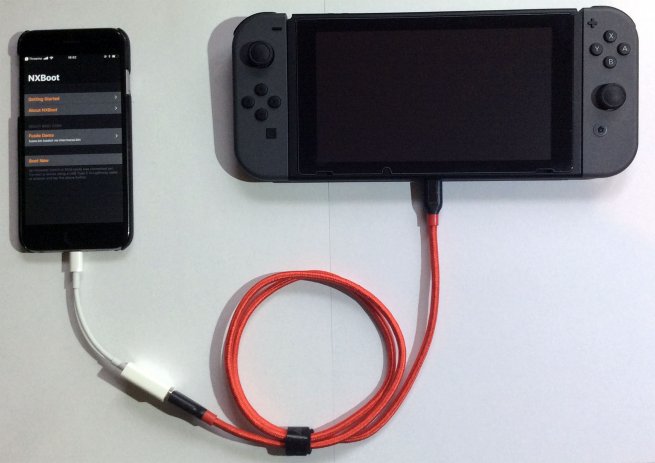 Does it work without a Lightning OTG adapter?
Nope.
Can you make it work without an Lightning OTG adapter?
Maybe, probably not. I'd be interested in technical details about the Lightning Camera adapter's internals and how iOS deals with USB host and device mode.
Will cheap, non-Apple OTG adapters work?
Maybe. I've received reports from some people who had success with cheap $5 Lightning OTG adapters, but others did not get their third-party adapter to work at all or had USB communication errors.
Why use your app at all if it requires a $30 adapter?
Because you've already got that adapter, or find it convenient, or found a cheap third-party adapter that works for you.
iOS software requirements?
NXBoot was tested and found compatible with all jailbreaks for iOS 10 and later, up to Coolstar's iOS 11.3.1/11.4b3 jailbreak. It may break if Apple changes some of its private APIs or sandbox details in future iOS versions.
Nintendo Switch requirements?
Any first generation Nintendo Switch with any firmware will work. There are reports about patched Nintendo Switch hardware on which the exploit no longer runs, but any switch purchased before 2018-07 should be safe.
Is this app free?
Yes and there are no ads. It was created as a fun experiment.
Is it open-source / free software?
No, not yet. I usually release source code a few months after the initial release to avoid user base fragmentation. (No obligation under the GPL to release this app's source code exists - it was developed from scratch with no dependencies.)
Can I pay anyway?
How nice of you! <3 I've got a public
Vous n'avez pas la permission de voir le lien s'il vous plaît Connexion ou S'inscrire
- maybe you find something there that's in the price range you have in mind. Thanks. Please understand that sending a gift creates no obligation on my part to create a feature or support you with an issue with this app​